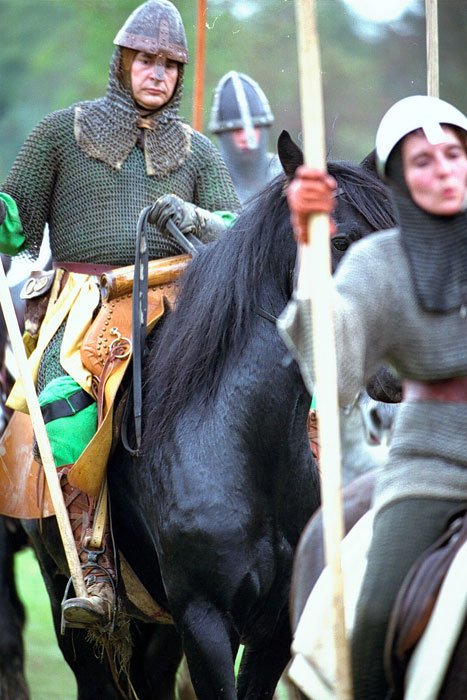 “… shows me on Sunday, the 15th of October, 2000, while I was participating
in the non-SCA re-enactment of the Battle of Hastings. I was one of 100
cavalry persons (see lady in foreground) participating and riding in the
battle recreation by around 1300 re-enactors from around the world, including
several dozen SCA members. “The armour that I am wearing is the first SCA helmet and mail hauberk
(knee length , with elbow length sleeves). I made the helmet in june 1966,
from 14 gage mild steel plates, with sheet copper banding around the
lower rim, and a thin leather lining. I made the 50 pound hauberk from 13
gage coat hanger wire rings, which were hand coiled and hand cut and torch
welded shut, after assembly. This was completed and worn at my first
Coronation on March 25, 1967.
“The cover of Tournaments Illuminated volume 1, Number 1. depicts me riding
in this armour at that March 25 th., A.S. I — CrownTournament. I chose to
wear the heavy armour to show the World (Re-enactment and mundane) that the
SCA was able to meet the strict authenticity requirements of the Event
sponsors! And also that it was being done with 30+ year old SCA knowledge
and technology.
“The saddle was newly made by me so I wouldn’t have to ride a modern english
saddle with a sheep skin tied on for camofladge, with period, iron, stirrups.
The first test of it was in the morning at the event.
“The black horse I rode on that Sunday, is named “King”, and was one of the
stunt horses that was ridden in the film, Braveheart, by Mel Gibson.”
– Henrik of Havn

Photo by (?)
Contribution by Henrik of Havn